Happy 2018.  Here are our favorites from last year.  Expect more new music from us this year.

Records:
Bash & Pop – Anything Can Happen
The Mezingers – After the Party
Tyler Childers – Purgatory
Could Nothings – Life Without Sound
King Woman – Created in the Image of Suffering
The National – Sleep Well Beast
Anthony Ruptak – Don’t Let It Kill You
Mastodon – Emperor if Sand
Jason Isbell – Nashville Sound
The Yawpers – Boy in a Well

and 9 other Denver bands.

Ty here. I hope this webpost finds you well.  . The hunks at Black in Bluhm Music will ship it to you. Or just get the digital version and somebody at Bandcamp will send it to you. I don’t really know how that side of it works. If you haven’t had a chance to hear our new song, do it right now. Its got everything you like about all eras of The Knew, so study up:

Also, the other tunes are unreleased gems and rarities from Bud Bronson & The Good Timers, Muscle Beach, The Outfit, Colfax Speed Queen, Major Sports, The Sound Collapse, SPELLS, and Dirty Few.  Here is an article that Westword did about it:

IMHO, this is an invaluable relic that documents an important time in Denver Rock City’s history and should be in the home of anybody that has seen a show by any of these bands, at anytime, but more specifically from 2010 to present day. However, this is not just limited to Denver people and the record could also find itself at home on a the shelf of any vinyl lover, worldwide. Digital counts too. Here are our favorite releases and shows from the past year for those keeping score at home.  Also, expect some new music from TK in 2017.  The music will be as fun as it is challenging.  Emotional too.

hai.  Schmew, our Nobel Peace Prize-winning 3rd LP can be found online via Greater Than Collective any way you want it.  Buy it here: GREATER THAN COLLECTIVO 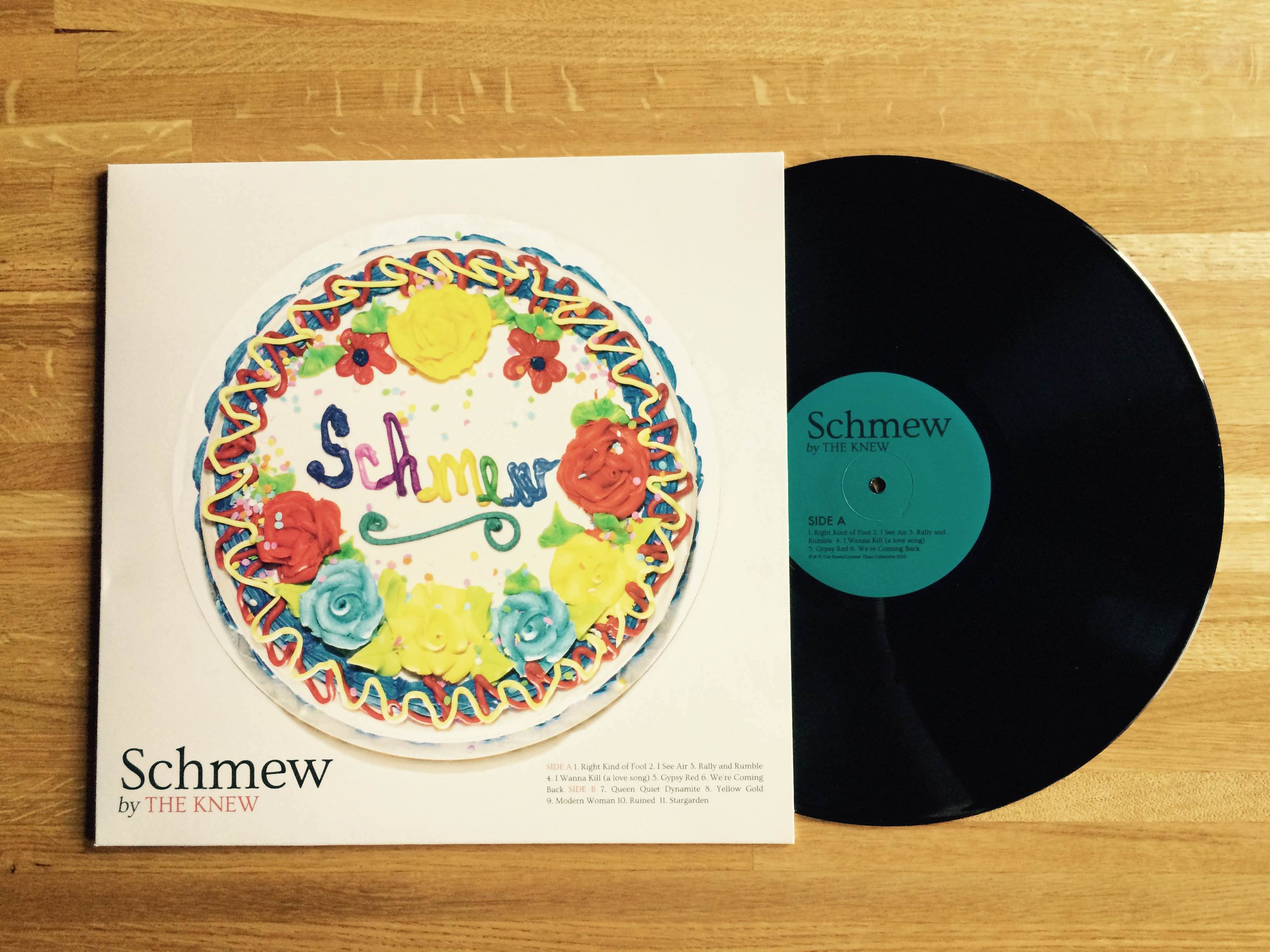 read Ty ramble on about some good stuff, and some not so good stuff… ultimately ending in a laugh.

Interview with guitarist Tyler Breuer | By John B. Moore

For nearly a decade, Denver, Colo.’s The Knew have been creating and perfecting a scruffy, punk-tinged rock sound that becomes fantastically addictive on repeated listens. The band’s latest, Schmew, is a tad bit heavier than their first few efforts, and along with some great originals, includes an inspired Cock Sparrer cover. “Jake [Hansen], our singer, brought it to the table,” guitarist Tyler Breuer says of the cover. “We are all big fans of late ‘70s, early ‘80s British punk, so it hit home. The lyrics are about friendship, and so are we. We’d like to cover more songs about friendship, or just any Randy Newman song, really.”

Who knew that Denver had so much more to offer than tie-dyed jam bands with wanky guitar solos? Breuer puts these stereotypes to rest. “As far as punk and rock goes, [Denver has] Dirty Few, Bud Bronson And The Goodtimers, The Outfit, American Culture, SPELLS, Chase Ambler, and loads more.”

According to Breuer, the Denver music scene goes deeper than just punk rock. “Denver has a really diverse music scene,” he assures. “Great rock, hip hop, country, jazz, various genres of Spanish language music, and yeah, jam bands. I think clowning on jam bands is kinda tricky, especially when they rip. All genres highlight some kind of absurdity of their chosen style, and I’m happy Denver is trying to accommodate all of them, but not happy that often times it doesn’t happen under the same roof.”

“Our city is getting better with cross-pollination between genres, but I’d like to see it happen more between different scenes, and even different parts of town, mixing it up together,” he continues. “Audiences can be fickle, and it takes them either no time to latch onto a band that they’ve been told by whatever tastemaker will change their lives, or it takes them 10 years to give a band a fair shake. Just ‘cause a band doesn’t fit into some preconceived notion of what one might want it to be does not mean they won’t come out and blow your box off.”

Thankfully, this segregation doesn’t prevent a sense of community and camaraderie. “Everybody comes out for everybody’s shows,” Breuer explains. “I used to think that could be a little nepotistic, [but] it has become more genuine. People are separating themselves from what they think might be important in whatever scene they are involved in, and are really just focusing on observing and participating in the music.” Sounds lovey dovey, but it’s not always Mr. or Mrs. Nice Guy. Breuer adds, “We are also hypercritical of each other, and we’re all big boys and girls and take that as a good thing. The less we champion style over substance, the better the Denver music scene has become.”

Despite their reverence for their hometown, The Knew are excited to tour. “We will be touring as much as we can,” says Breuer. “New Noise readers, comment on where we should go on this here section below. Or better yet, tell us not to come to your city and we will avoid it because we trust you and your not liking us.” Whether you like them or not, The Knew are ready to “get Schmew out there. We’ve worked for a long time to write songs like this, and to get a record sounding this way. We are excited to play shows in support of it.”

One question lingers: what the fuck is a “schmew?” Breuer clarifies, “[The album] has a ridiculous title, but we wanted it that way because the content is heavy. Making music in The Knew for 10 years, we’ve realized we are on this ever swinging pendulum of taking things too seriously and then having too much nonsensical fun. We live in this place where we are congratulating ourselves for our best record yet, but also know that, in the grand scheme of things, it’s all just so damn absurd and who fucking cares? Hence: Schmew. It’s taking the one thing you love more than anything—music—and acknowledging that it owes nothing to you. How fucked up is that? [Laughs] So, instead of wallowing in how shitty of a lover music can be, let’s make it the best we can, and then call it something like Schmew, so the music itself can never get too high and mighty.”

“Also,” Breuer adds, “10 years later, we are still unhappy with our band name, and chose to recognize that with the title of this album: The Knew – Schmew.”

Gonna screen print up a bunch of these for y’all too. Here is the video to go with. “Company” – Before It Ends CHECK OUT MORE VIDS AT THE KNEW’S YOUTUBE PAGE. ENJOY.

This is the online HQ of TK. We update it as much as time and ability allow. We are not really good web guys, but understand the importance of the timeliness of disseminating accurate information. TK is made up of four members (Jacob, Ty, Tim, Andy) and are an inclusive band and believe in the strength of PMA. TK is against all forms of shitty scenes (music or otherwise) and attest to the power of being humble and vulnerable. We book and manage ourselves.

WE ARE FRONT ROW BOYS WHO PICKED UP SOME INSTRUMENTS AND THINK YOU SHOULD DO THE SAME.

WRITE US AT ANY OF THE SPOTS BELOW AND WE WILL HOOK UP.  WE BOOK AND MANAGE OURSELVES.

Or send us a message using this handy little contact form: